Many organisms on our planet rely heavily on freshwater for survival, including humans. When key sources disappear due to drought or become undrinkable due to contamination, then drastic changes occur to the local ecosystem.  Saltwater intrusion is one such cause of contamination of freshwater, which is impacting drinking water and causing agricultural lands to become unusable across the globe.  The remainder of this article goes over why saltwater intrusion is occurring, how it is measured, and what can be done about it.

Why is saltwater intrusion occurring?

Freshwater naturally flows from areas of higher to lower elevation, either soaking into the ground or flowing across the earth’s surface to the ocean.  Seawater, on the other hand, soaks into the ground and pushes freshwater inland because saline water is denser.  As depicted in Image 1, the force from freshwater flowing to the sea and saltwater flowing inland balance out in a zone known as the interface.  The position of the interface varies by location depending on soil composition, weather, and human activity.  The rest of this section mainly focuses on how humans are affecting the interface and causing an increase of saltwater intrusion. 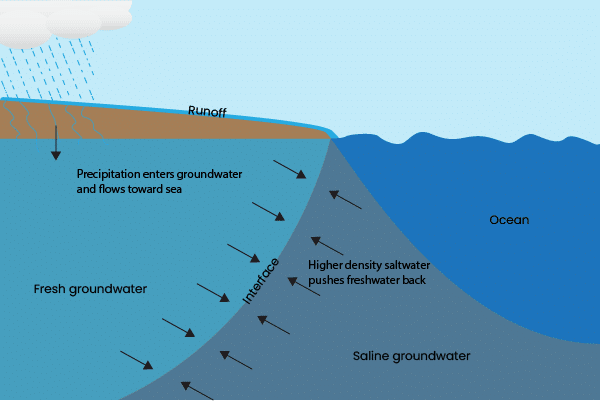 Image 1. Forces of Saltwater Intrusion – Arrows represent the natural flow of water without human intervention.  A balance between freshwater and saltwater flow is found at the interface.

Groundwater usage is growing with the global population as the demand for drinking water and crop production increases.  As a result, groundwater is being depleted in many regions because the natural water cycle does not provide enough precipitation to replenish the amount we are removing.  The reduced volume of freshwater means there is less force pushing saltwater back, leading to the interface moving inland.  On the surface, reduced freshwater flow leads to saltwater traveling upstream or through marshes and leaking into the surrounding soil.

Not only are humans withdrawing more water, but we also impact precipitation volumes through climate change.  Weather patterns are being disrupted around the globe, with many areas experiencing higher temperatures and more severe droughts than in recent history.  This reduced rainfall and increased evaporation worsens the problem of saltwater intrusion in many areas. In addition, rising sea levels are also pushing saline water inland, further exacerbating the problem. 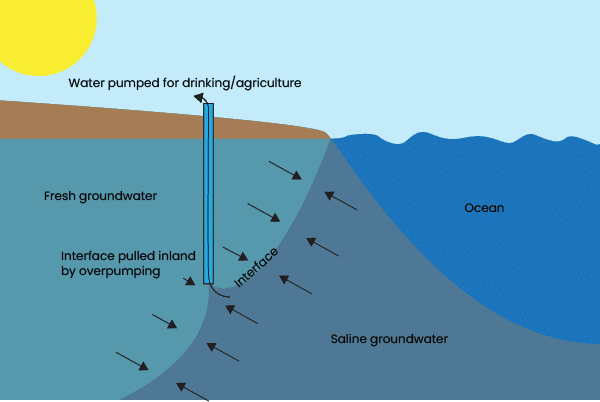 Image 2. Forces of Saltwater Intrusion with Human Interference – An imbalance is created in groundwater flow when humans pump out water, resulting in saltwater moving inland.

How our world is impacted

Access to freshwater is imperative for the survival of both plants and animals so, as water sources become contaminated with salt, natural ecosystems become unstable.  Obviously, humans are not exempt from these effects.  According to the Stockholm International Water Institute, “at least 2 billion people of the 7.6 billion on Earth use groundwater as their primary source of water”.  This reliance on groundwater means that nearly 50% of the world’s aquifers are being depleted and may not be capable of natural recovery.

Even when rainfall does arrive and replenish groundwater, the intrusion of saltwater leaves scars on the land.  Due to the chemical properties of saltwater, more nutrients dissolved in it and are carried away, leaving once fertile land unable to grow crops.  This, in turn, leads to algal blooms that kill aquatic species when the nutrients are carried into local waterways.  As you can imagine, this chain reaction of events makes it difficult to predict just how much any given region will be impacted.  The best we can do is try to prevent it from happening.

How is saltwater intrusion monitored?

To prevent saltwater intrusion, we first must understand how these problems are occurring.  To do so, scientists are monitoring various groundwater parameters in affected areas to detect changes over time.  The most common method is to drill multiple wells in a region so samples from varying depths can be analyzed.  This may mean collecting samples in bottles and sending them to labs–or inserting water quality sensors like the pHionics STs Series™ down wells to track salt intrusion in real time.  Common collected data includes depth-to-water, conductivity, pH, temperature, and optionally dissolved oxygen, ORP, or turbidity.  By tracking these in multiple wells, scientists create a map of groundwater levels and determine the interface location of fresh and saltwater.

In addition, geophysical loggers are lowered into the well to map the soil composition and major geologic formations that might affect water flow.  One example of how geology affects groundwater movement can be seen in areas containing clay layers.  Clay is extremely compact, with little space between particles for water to travel.  As shown in Image 3, clay prevents surface water from reaching the underground aquifer to replenish it after precipitation.  While that is detrimental if the aquifer is being over pumped, the clay layer can also be protective if saltwater intrudes into groundwater from above by preventing salt from reaching the deeper aquifer. 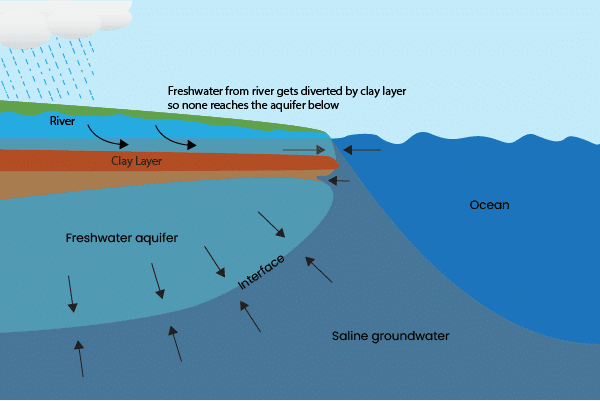 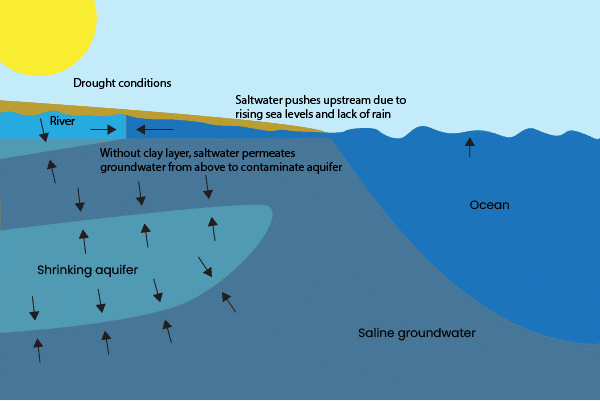 One solution is using material with low water permeability, such as clay discussed in the previous section.  By building a wall with this material between the fresh and saltwater, intrusion can only occur below the wall.  Obviously, this method would alter the environment and potentially lead to unforeseen ecological problems in the future, so what are some other solutions to saltwater intrusion?

The best solution is to reduce human water withdrawal in threatened regions, when possible.  Doing so may not be possible for growing populations reliant on groundwater, however, as it is expensive to change locations of wells or have water shipped into the region.  In addition, water regulation must have a means of enforcement, which is not possible in places where governments do not “own” groundwater.  This includes areas in the United States like Texas, because landowners technically own all the resources on—or below—their land.

Another solution is to artificially recharge aquifers through infiltration structures such as percolation tanks, spreading basins, or injection wells.  These structures are built over areas of porous rock to trap water runoff, forcing water to drain into the soil and recharge the aquifer.  Regional ecology can be impacted if too much runoff is diverted into infiltration structures, however, so this method also has risks.

As each region has different soil, weather, and human activity, no single solution works around the globe.  Unless a combination of these methods is used, food and water shortages will become more common, worsening with the rising sea levels caused by climate change.  We also must be alert – monitoring groundwater in areas where saltwater intrusion may occur and acting pre-emptively to stop it.  Our goal at pHionics is to assist in real-time groundwater monitoring with water quality sensors.  Normally, there would be a sales pitch at the end but, frankly, that does not seem appropriate for such an important topic.

We at pHionics believe humanity has the passion and ingenuity to solve problems like saltwater intrusion, along with the other effects of climate change.  To everyone learning about these issues and looking for solutions, we thank you and will continue to support you to the best of our abilities.

For any questions or comments about the article, please reach out using our contact page by clicking on Contact Us below. 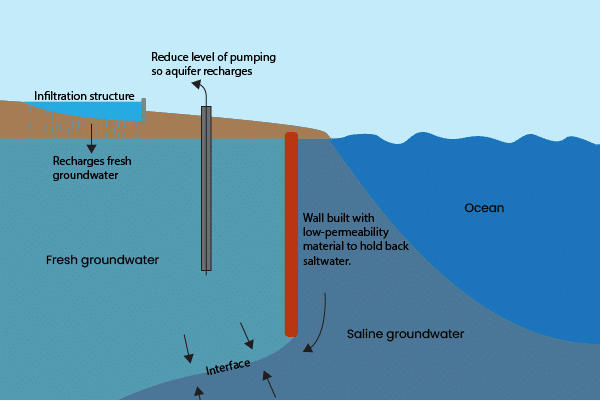 Suggest an Article or Video Topic!

STs Series sensors are constructed from high-quality, durable materials that can be stored for long periods of time. The only weak point is the electrode, which can be damaged or expire during storage in the wrong conditions. These conditions vary depending on the type of electrode, which is why we have different storage instructions for each sensor.

END_OF_DOCUMENT_TOKEN_TO_BE_REPLACED 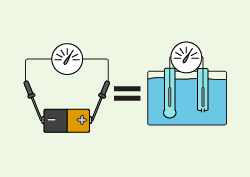 How a Glass pH Electrode Works

END_OF_DOCUMENT_TOKEN_TO_BE_REPLACED 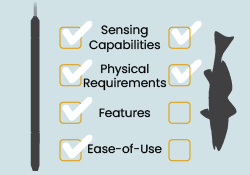 Sensors are the backbone of any water quality monitoring system since they determine accuracy and reliability.  Learn more about important characteristics to consider when choosing a sensor for your application.